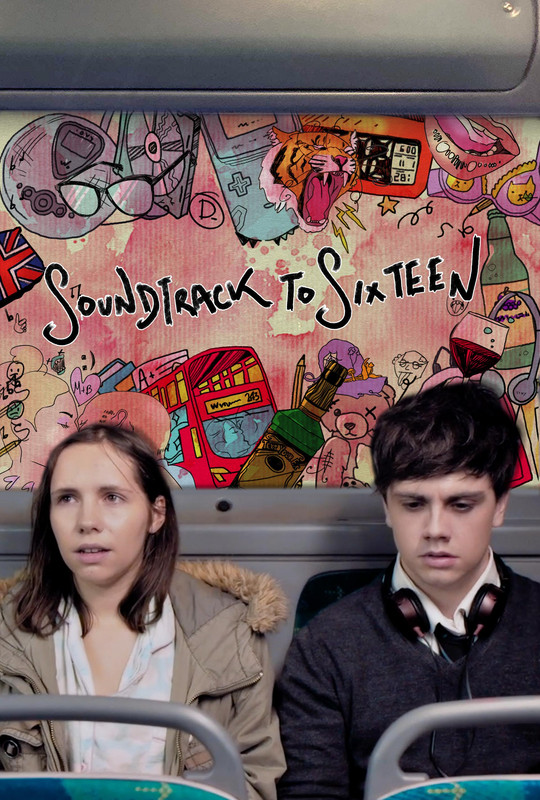 Soundtrack to Sixteen takes place in London in the early 00s. Maisy (Scarlet Marshall) has never been kissed and worries about fitting in, both with her friends, most of whom have more experience, and with the 'cooler', more popular crowd. Ben (Gino Wilson) is initially okay with being a nerd, but when his grades start to slip he too wants to become more of a part of the popular crowd. When the two meet and get talking, a friendship begins and like many friendships at sixteen, it gets complicated.

I talked, in my introduction to this site, about how coming of age films are about universal experience. That's certainly true of Soundtrack to Sixteen, it's a film all about the messy nature of trying to fit in at that age, of navigating the changes and experiences we go through and of sometimes feeling inadequate or like an outsider because we haven't yet hit a particular milestone. With their screenplay, sisters Anna-Elizabeth and Hillary Shakespeare capture this beautifully. The writing spills over with detail, both in the situations and for me in the language. It's in these details that the film is truly affecting, because it's through them that it pricks most forcefully, thoughtfully and honestly at memory.

For me it was perhaps the voiceovers, relating Maisy and Ben's thoughts, often in opposition to what they actually end up doing or saying, that prompted the most visceral feeling of being thrown back into my own teenage years. The scene in which Maisy and Ben have their first proper conversation on an otherwise empty night bus is especially strong in this regard, with voiceover and dialogue running into each other in ways that are both funny and familiar. This scene though is far from the only one to hit in a personal spot for me. In a justly celebrated sequence in Eighth Grade we see Elsie Fisher at a party, very much on the outside looking in. There are similar moments here and even more so than in that film, they felt ripped from my own experiences and, I'd  wager, those of the filmmakers or their friends. There's never any doubt, from the moment the protagonists literally run into one another in the film's opening sequence, about where Soundtrack to Sixteen is heading, but it always charts its path with a great deal of warmth and wit.

A fairly inexperienced cast paired with a young director making a debut does mean that the film has some rough edges to it, most of which come in the performances. The supporting cast are a mixed bag, seemingly recruited from friends and family, they can sometimes come across a little stilted. Scarlett Marshall turns in a very good performance as Maisy, hitting just the right note of awkwardness while making her dialogue sound like she's saying it for the first time. That latter aspect is where Gino Wilson, though the two share a credible connection, can't quite match his co-lead. A little too often Wilson comes across as delivering lines, rather than just speaking off the top of his head. That said, this has a few moments in which it works to suggest Ben trying to stave off awkwardness by saying something he's rehearsed and perhaps sounded clever in his head - again, I can identify. Ultimately, I was invested in the pair and I still found myself very much identifying with Ben, particularly in a scene in which he and Maisy are studying in the library.

One thing that struck me watching this film is that we tend to talk about realism in film primarily as it relates to bad or difficult things happening to characters. The events of Soundtrack to Sixteen present their share of challenges for its characters and Maisy in particular goes through some tough things in her relationship with the popular girls she so desperately wants to be her friends. Despite that, this is at the end of the day something of a feelgood film and one that lives in to cliche, yet it still feels to me like it should be seen to some degree as a realist piece. I can't imagine anyone - especially a Brit who was young in the early to mid 00s - not finding something that speaks directly to them here.

This is by no means a perfect film, it bears many of the marks of what it is: a low to no budget debut produced with the help of family and friends, it's clearly been through a long process, having been shot in 2013 before premiering in 2019, but that process has allowed the Shakespeare sisters to hone it into a fine calling card and a film that, given the chance, ought to find a welcoming audience who will want to pass it on to their friends.
★★★★
Posted by Sam Inglis at 09:21